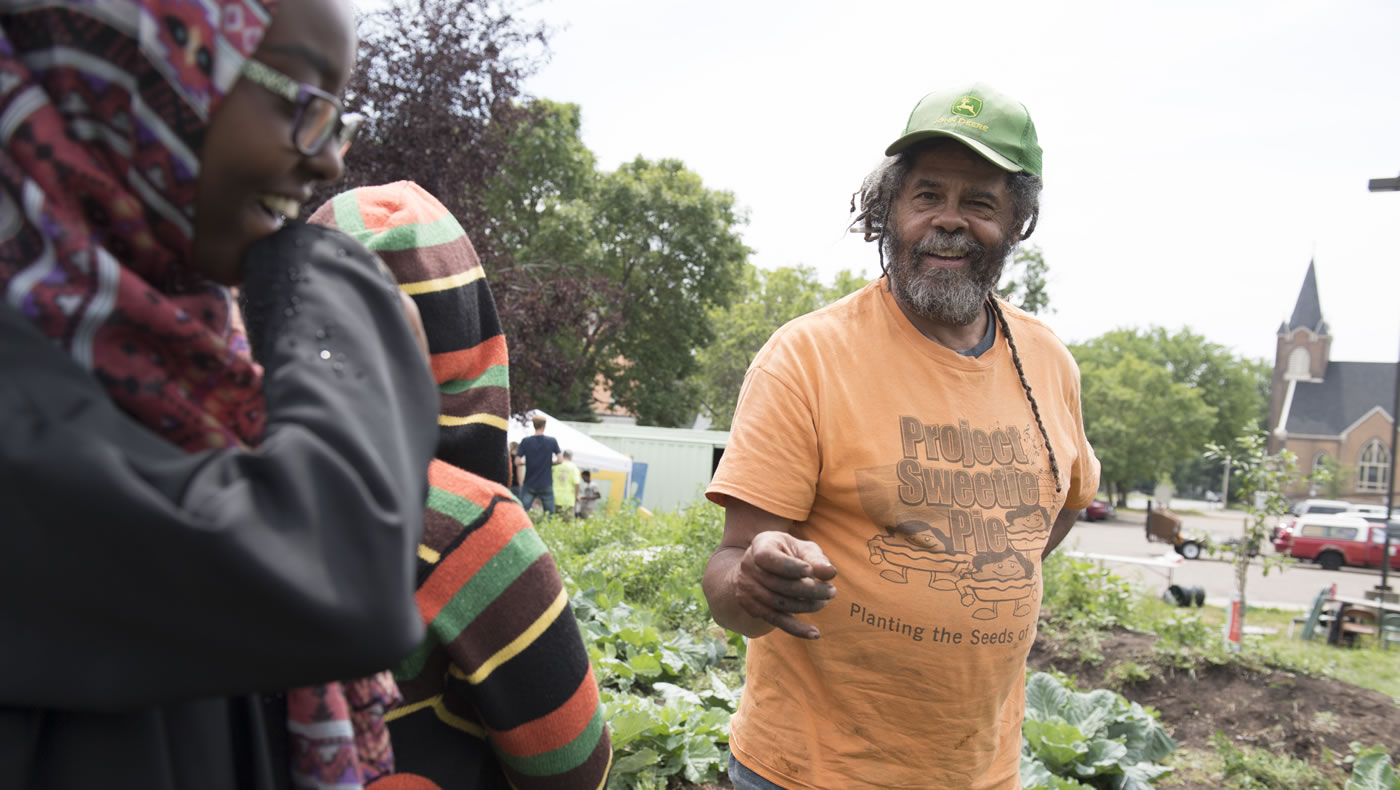 Michael Chaney doesn’t consider himself a farmer or grower. Rather, he’s a self-proclaimed “Ag Patriot.” He sees agriculture as a tool to engage people in equity and justice work. “Growing food is the easy part,” he says, “growing growers is the hard part.” He believes we must approach the future on a more complex basis than simply growing vegetables and that means also growing soil, growing people, growing education, growing legislation, and growing equity. Michael Chaney founded Project Sweetie Pie which embodies this idea. Project Sweetie Pie started as an organization to address food insecurity on the Northside of Minneapolis, then became a pathway to higher education for students at North High, then an antidote to the school-to-prison pipeline, and so on. Always rooted in growing food, Project Sweetie Pie fights for justice in the environment, food, climate, and economics.

Give us a call and learn what we mean.

Where once lay urban blight.

Gardens without borders, Classrooms without walls.

Architects of our own destinies. Access to food justice for all.

This is Michael Chaney’s call for justice. Michael Chaney also helped found Midwest Farmers of Color Collective (MFCC) and he represents MFCC on the planning committee for the Emerging Farmers Conference. MFCC is ‘a collective of Black, Indigenous, Farmers of Color (BIPOC), centered on racial justice and the development of food and farming systems that honor our communities past, present and future.’ Chaney sees local food production as the latest iteration of the civil rights movement. He says communities of color need the space to come together and decide who they want to be as Americans and as growers. The Emerging Farmers Conference provides a place to do so and create a discourse so that communities of color can control their own narrative. He hopes MFCC can lead the way in creating this discourse. “When you control the narrative, you control the future,” he says, “Agriculture is in our DNA, but it’s always been someone else telling our story.” Farmers of color need spaces to deliberate about the future of the world. People of color historically haven’t been afforded access to spaces like this or access to land. It’s only through working within spaces like conferences that POC can move into positions of power and claim the future. Michael sees the Emerging Farmers Conference as a platform to elevate the voices of farmers of color.

and now like sweet potato vines, our missions and goals all intertwine

This year at the conference Michael hopes to see “full-bodied and full-throated dialogue.” “We have to build trust and create a seamless thread between communities of color.” He hopes the conference can provide a platform for communities of colors, organizations and individuals alike to intertwine their missions and goals so we can advance equity and justice in our food system and beyond. “The power is in our hands only if we’re willing to invest in our own future and hold people accountable.”